After three months at sea, it was time for a road trip and another Delvy adventure. It was a relief to be on terra firma for a break: it didn’t take long at all to find our land legs. Travelling in the motorhome is very easy compared to the challenges of a large sailing vessel so we were happy to take a long drive north over a short space of time for a change of scenery and to catch up with friends. 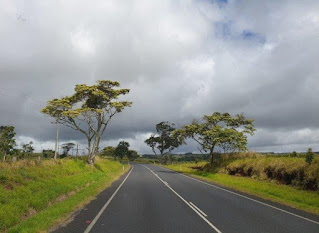 Our first overnight stop was at the privately owned Donnington Airpark south of Townsville, where friends flew or drove in for a weekend get together. We were each lucky to get a dawn aerial view of the campsite and the Bowling Green Bay National Park ridgeline poking through the fog enveloped flat land below. As the fog lifted with the increasing light, I caught a glimpse of the region’s potable water supply, Lake Ross, before coming into land on the browned airstrip.

After a hearty cooked breakfast, it was time to hit the road. Next stop, Yorkeys Knob. Google Maps says it’s 400km and 5 hours driving away. In Delvy, that means 8 hours driving at least: a full day for us as we average about 90 kilometres an hour. This is northern Australia, and if you want to get anywhere, you have to drive for a very long time. We don’t mind though as we can stop where we like and relax in our own self-sufficiency: except for diesel fuel of course, which, fortuitously, is fairly cheap at the moment. We’ve travelled this part of the Bruce Highway (the Sugarcane Way as we like to call it), several times, and have already explored most of the attractions along the way so we were content to just drive and enjoy each other’s company.

Our long-time friends and the smell of a lamb roast dinner greeted us on arrival north of Cairns, and a rainy walk around the township and boardwalk highlighted we were in a different world. So many tall, lush tropical plants – a contrast to the dry tropics of the central Queensland coast. 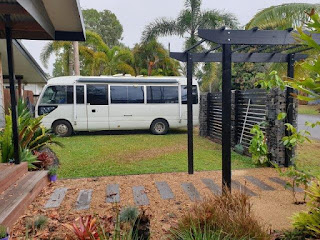 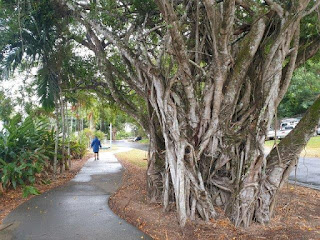 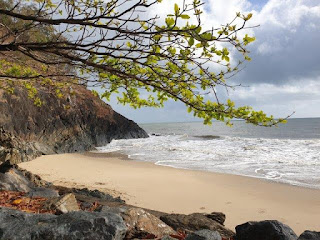 We can’t seem to stay away from boats so took the opportunity to catch up with people we met at Christmas in Newcastle – his mother lives opposite my mother – who are living on board a 42-foot catamaran in Bluewater Marina. After an extended cuppa, it was time to head home, choosing to go up the range on the Kennedy Highway via the Atherton Tablelands. With COVID-19 restrictions, Cairns and the surrounding areas are very quiet on the tourist front: attractions are only open on weekends so it will have to be another time to experience the Skyrail Rainforest Cableway, amongst other things.

Lunch was at Rocky Creek War Memorial Park on the site of the largest WW2 military hospital in the Southern Hemisphere, where approximately 60,000 Australian soldiers were treated and rehabilitated by about 2,000 staff. Set amongst the dry open woodland, you can wander around the memorial stones of those who served, and view the interpretive signs explaining the layout and function of this extensive area. 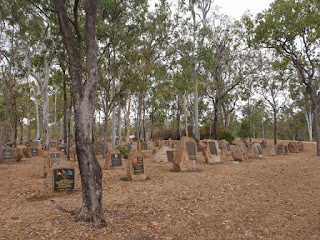 Climbing to 1162 metres, the highest road in Queensland took us towards Ravenshoe, the highest town, and down the other side of the Great Dividing Range into cattle country. Traffic was very light, and as the afternoon sun dropped it was time to look for a campsite. The beauty of the Australian outback and being in the middle of nowhere is that you can camp anywhere on the side of the road. Provided you don’t park across an access gate or track, the world is your oyster. Passing traffic reduced to zero from sunset to sunrise, and with only bird noise breaking the silence it was a blissful night’s sleep in the Aussie bush.

Leaving National Highway 1, we turned onto the Great Inland Way and headed for the first available fuel. Back in January 2017 we travelled this 3000 km tourist road from Clermont to western NSW. After filling up at Greenvale Roadhouse, we took a quick spin around the 1 km² village, which revealed the main attraction as a fine example of a sausage tree. Taking turns at driving and stopping at the countless roadworks, we reached the popular and enormous Fletchers Creek camp area, a stone’s throw from the Burdekin River and Dalrymple National Park. Without our e-bikes, our explorations were minimal, but reading some of the history was interesting. Ludwig Leichhardt camped near here on his 1844 expedition from the Darling Downs to Darwin, and several hundred school children also camped beside the river for 18 months during WW2 as their school in Charters Towers, 55 kilometres away, was acquisitioned by the Commonwealth and used as a military hospital. 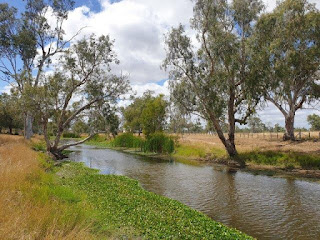 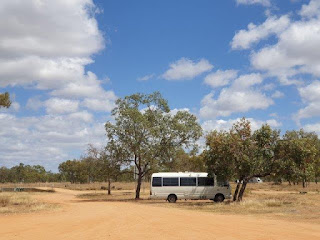 Moving on and more fuel later, we took the turn off to Ravenswood, a gold mining town since 1868 with several beautiful historic buildings. After a town wander, we acknowledged the warning sign, “No caravans and buses”, and drove the 90 km part gravel road down to Ayr, admiring the marvellous views of the valley below. Having come full circle, we again crossed the impressive Burdekin River Bridge near the river mouth, which is nearly 800 kms from its source. 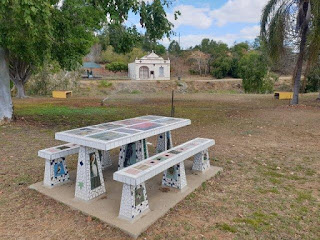 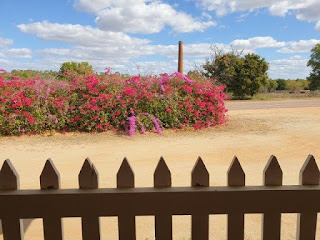 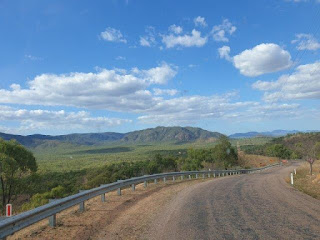 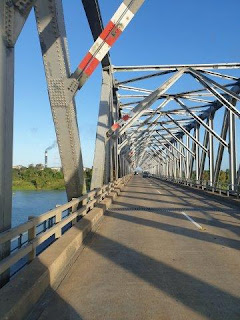 We spent a night beside the railway line at the Home Hill Comfort Stop Rest Area, a fantastic initiative by the Burdekin Shire Council that encourages and welcomes RV travellers. Back in familiar territory, we were now on autopilot as we drove to Bowen, via Whitsunday Sands Resort to say hello, Proserpine, then home. Six days, five nights, and 1750 kilometres averaging 14 litres to the 100. Just a short trip! 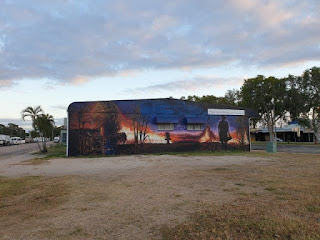 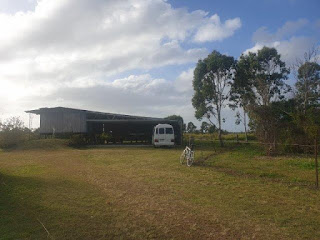 You might have noticed that adventures in Delvy have currently been replaced with adventures on a big red yacht.  We’ve swapped one isolating lifestyle for another; a green landscape for blue. Living in a small space on land and water has similarities, but there are plenty of differences. Knowing how to sail is one of them!

Having spent a few years roaming the vast land of Australia in our Toyota Coaster motorhome, life on the water kept beckoning, so we have found ourselves a floating home once again. This sailing vessel is a little different to our previous yacht, Lady Katherine. We are now the proud owners of a 71-foot Pacific Proa. What’s that you ask? More on that later, but in the meantime let’s compare life on the road with life on the water. 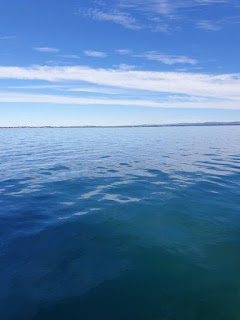 Read more »
Posted by Katherine Sellers at 14:28 No comments:

Travelling along National Highway 1 at 110 kilometres per hour is a bit of a novelty, but seeing as this trip was about getting to the destination as quickly as possible, then speed was essential and Delvy not the vehicle to do it in.

It’s two thousand kilometres from Airlie Beach to Church Point where we had to pick up a yacht, which amounts to about 24 hours of driving time. With two drivers swapping in and out and a pre packed picnic bag, plus overnight stops in the Sunshine Coast and Lake Macquarie, the mission was accomplished in two and a half days.

This was far quicker than we have ever done the Australian east coast road before, but we had an appropriate vehicle to do it in.  In contrast, it would take Delvy a week to travel that distance.

Which would I prefer, fast tracking or taking the slow lane?

Read more »
Posted by Katherine Sellers at 17:39 No comments:

As COVID-19 restrictions begin to ease it hasn’t really changed much for us in rural Queensland. We’ve been here 6 weeks now and are happy living on the ‘farm’, still keeping busy with odd jobs like mowing, weeding, and shack maintenance, but enjoying the tranquillity and solitude of the Lethebrook district.

We’ve had a few bike rides along the river near where we are staying in isolation, and witnessed enthusiastic locals’ fishing from its banks or in a tinnie. Always keen to get on the water, we set off to explore the mighty O’Connell River and its mangrove tributaries, but unlike the locals, without fishing gear.

Read more »
Posted by Katherine Sellers at 16:58 No comments:

How to live simply in a motorhome

You’ve heard the saying that less is more. I believe that the less complicated life is and the less stuff you have, the more content you are. Living in a motorhome is a simple life: we have all we need, and we can go where we like, and whenever we like. Well, not at the moment but we’ll pretend all is well in the world. ☺️

How do we do this, you ask?

Read more »
Posted by Katherine Sellers at 10:35 No comments:

6 ways to stay sane while living in a motorhome

“You’re living the dream!”, we are quite often told. Well, yes, we are, but it takes a while to work things out so it doesn’t become a nightmare.

Let’s face it, living in a motorhome is not for everyone. It’s all well and good to go travelling for a set period of time: you usually have a wish list of the sights you want to see and things you want to do in the allocated period, and then return home to your respective corners at the end of it.

But, if you live in an 7 x 2 metre space fulltime, as we do in Delvy, then there are a few strategies to put in place to remain sane and to continue to enjoy the experience.

Read more »
Posted by Katherine Sellers at 14:35 No comments:

Katherine Sellers
Living on the road in our motorhome, Delvy, taking photographs and writing stories of our adventures in Australia.